After the bedtime story, she urged him to take her there, to the place where she could see the rainbow.
To a kid who had never seen a rainbow, her dad’s description about it while narrating the story, sounded magical.

“I want to run my fingers all over those colors- violet to red. Just like that princess in the story”, said Purple.

Her dad kissed her a good night and promised to take her there the next day.

She went to her school.
“Evening, after the school?” she had thrown a reminder before jumping into her school van.

He thought for a while and decided to skip his office. He threw away his bag and drove to a store next street.

“What’s all this? Aren’t you going to office?” his wife asked him, after seeing him return with a large bag of colored papers, paints, balloons and much more.

“Charge our handy-cam. When purple returns from the school, she will be caught with a surprise. I want you to capture that entire episode”, he grinned and went straight towards the backyard.

He painted those papers, cut them into ribbons and pasted them together. He Hung them all over the backyard.
He dipped the brush in the paint can and splashed colors on the garage wall. He filled air in balloons and tied them to lamp posts.

“What are you up to?” asked his wife, seeing the mess.

“It’s the rainbow land. Can’t you see? When Purple returns from school, you should see her face”, he spoke in excitement.

He braved the sun and worked until he was done. When he was done, it was half -past three.

“What do you think?” he asked in all excitement.
His wife looked at the backyard and the garage that stood there. ‘That’s a bad effort’, she thought.

“It’s beautiful”, she widened her eyes to appear convincing while floating the lie.

He was yet to complete his word when he felt a drop of water falling right over his nose. He looked upwards, at the sky.
In no moment, dark clouds seized the sky and sun went into hiding.
It started raining heavily – right from the first drop!

He stood at the backdoor, silently watching all his efforts getting washed away.

“That’s okay. Purple will be happy to know that you had tried your best”, she said.
“She’s a kid”, he looked outside, through the window.

The clock rang four and the school van arrived.
Her mom walked towards the gate with an umbrella, to pick her up.

“Daddy! Let’s go to the rainbow land”, she jumped into his arms.
“First let me dry you and get you dressed”, her mom started drying her with a towel.

He silently made an exit to his room.

“Dad! I am ready”, she appeared in his room after about ten minutes. She was dressed in her favorite white frock and appeared like a princess.

“It’s raining outside! We can’t go now. Some other day”, he said.
“But you had promised”, her face dropped.

“Purple!” her mom called her and took her away.

He buried himself in his laptop again and tried attending his office work.

“Daddy!”, he heard her exclaim.
‘She must have explained her efforts that I had put in’, he smiled faintly and silently walked towards the backyard.
The kid and her mother were at the backdoor.

“It’s a rainbow!” she screamed in joy.

He approached them and looked towards the sky.

The sun had sneaked out from his shelter and dark clouds had disappeared.
In the vast canvas of the blue sky, there was the rainbow – large, arched and colored from violet to red!!

“Thank your dad for the rainbow”, his wife prompted the kid.

“Thank you dad”, she pulled his cheeks and planted a kiss. He smiled in joy.

The mother stood there with the handy-camera, capturing the moment and smiling in content!

“I am going to tell you a story of Margaret fairy”, he said.
“Margaret fairy? What does she do?” Purple asked him curiously.

“She does magic”, he smiled.

She stayed silent for a while and appeared to be lost in thoughts.
“Daddy! Was mumma named after her?” she asked him innocently.

He looked into his wife’s eyes and both smiled at each other. 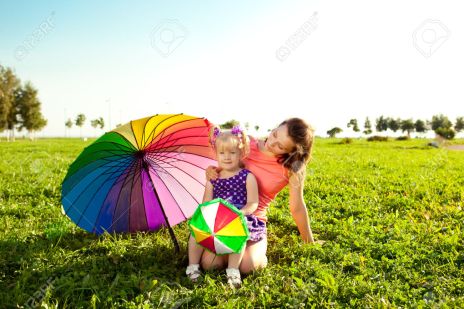 “Have never met a female clown before”, he said and put aside the newspaper.

The break-up of ‘Beatles’ music band had occupied the headlines of the newspaper.

She was a clown at a reputed circus company and he was into the business of paper mills. They were at a coffee shop.

“No one likes to go out with a girl who works as a clown. You are an exception”, she smiled.
“I see that you have got a dimple”, he pointed out.

She – “When you are a clown it doesn’t matter. The smile painted on your face gets the better of it”.

She was the only daughter of a reputed publisher in the town. Needless to say that she was rich.

“Hmm.. that mine was a wrong question”, he replied.

Their families had thought of their marriage alliance and she wanted to meet the groom in person, before giving her nod.

“Tell me something interesting about your job. How do you feel when your act doesn’t draw any response from your audience?”, he asked while keeping a curious face.
“That’s the thing about painted face”, she paused.

She took out a paper napkin and started scribbling something on it.

“If you see audience laughing their heart out you feel like peeling off the mask and revealing yourself. For, you want the person who is doing the act to get the accolades and not the ‘clown’. Because, no one’s going to remember the person who did the act. For them they are all the same”, she smiled.

“A clown”, she added and held out the picture of the female clown that she had just drawn.

“And what about the times when your humor doesn’t work?”, he said while taking the paper napkin from her hand.

She took a sip of the coffee.
“You feel good that the audience haven’t seen your face. For the audience, it’s the clown who has failed at the act and not the person behind it”, she laughed.

“That’s a nice picture. I shall keep it with me”, he said and buried the napkin in his coat pocket.

“That’s not the only thing about the painted face”, she continued from where she had stopped.  “It helps me hide my anger when our boss yells at me. It helps me bury my boredom when I am in the middle of a boring talk”, she said.

“Are you hinting at our ongoing conversation?”, he asked.

“No”, she laughed. “I was just trying to endorse it – the painted face. How i wish everyone had the luxury of wearing painted faces even outside the act”.

“Like the other clown”, she exclaimed in excitement.
Excitement in her tone drew his attention and he grew wary.

“There’s the other clown who works at our company. He is yet to perform on stage. He never removes his make up. Not even when the act is over”, her excitement was persistent.
“That’s interesting”, he responded.

“No. That’s not the only interesting part. Everyday before the show he comes up to me and hands out a rose to me, a red one”, she paused.

He dropped a sugar cube in his cup and started stirring it.

“And he has never spoken to me once. All that he does is giving me a rose and bringing his hand close to his chest”. He could notice her eyes gleaming while narrating the account.

“Probably he likes you”, he said.

She could sense an element of discomfort in his voice.

“Ah. Probably.! But he has never really confessed and it would be wrong on my part to draw any inference without really understanding his intentions”.

Both stayed quiet for a moment and silently took a sip of their coffees.

“So what do you do every time he hands out a rose to you?”, he asked.

“I just stay quiet and put up a confused smile”, she laughed.

“He must be looking terribly disappointed every time you do that”, he raised his concern.
“I don’t know”, she paused, looked at him and smiled.
“That’s the thing about the painted face”, she paused again. “It lets him bury his emotions under the makeup. And all that I see is his painted smile”.

“Oh.!”, he smiled – for the first time in the entire conversation.

She caught the dimple on his right cheek.
“I see that you have got a dimple”, she pointed out.

He stayed quiet for a moment and smiled broader.

“When you are a clown it doesn’t matter”, he kept his coffee cup on the table.
“The smile painted on your face gets the better of it”, he added. 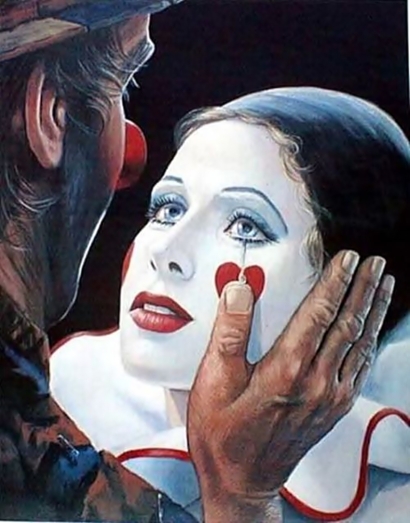 When he was done with reading his dad’s research journal, he was excited.
For, he knew he could build a machine that would take the world back in time.

He spent next ten years building that machine.

When he was done, he turned it on and
asked it to make the world travel ten years into the past.

The machine blinked green and carried out his word.

When it was done,it had vanished into thin air.

He was into the second page of his dad’s research journal- in a hope that it would help him build a time traveling machine..!!