(Haven’t read the sixth episode yet? click here to read it)

“Hello..!!” I smiled tenderly when she opened the door. It was 10 in the morning, and I knew that her mom will be in her college.

“I am sorry for that day and for everything that has transpired in these four months. Sorry for coming here in your mom’s absence. She wouldn’t have allowed me to meet you if I had come in the morning”, I apologized and extended the bunch of tender coconuts and fruits towards her. With four months of long silence between us, formal gestures had taken a front seat.

She took those fruits from me and replied “It’s Sunday. And no one runs a college on a Sunday”. The next moment her mom entered the hall, drying her hair with a towel. Gosh..! Yes. It was a Sunday.!

I expected her mom to chase me out, but was completely taken aback when she instructed us both to go upstairs and have our conversation.!

As soon as she closed the door, I ran into tears and hugged her. The fear of losing her had turned me into a weakling.

“Don’t be that melodramatic Sid.! I am not dying”, she laughed. For the first time in four months, I had seen her laugh.

It appeared as if all her anger had subsided and she had pardoned me.

“Shut up Anahita. You have cancer”, I chided her. You can take the liberty of showing affectionate anger in moments like these.

“Not anymore”, she smiled.

“What do you mean not anymore? The tumor is removed yes, but you are not out of danger.  There are chances that few malignant cells are still remaining. So you cannot relax”, I replied instantly.

While it’s on the moral side to instill a hope of survival in a person fighting her disease, I had chosen a completely wrong side – displaying my expertise in biological science.

“You don’t know how to talk to a person who has cancer”, she sounded upset. I bit my lower lip and put up a sorry face.

“I am here to take you along with me to Bangalore. I want to marry you “, I said. I wasn’t an expert at putting across my emotions in an effective manner. My tone failed to convey how much I missed being with her and how badly I wanted to get married to her.

She looked at me for few seconds. “You broke my heart by getting engaged to her and broke her’s by cancelling it. It’s not some table tennis game Sid. It’s your life and ours too. Stop doing ping and pong”.

In spite of being the genuine reason, it wasn’t something credible for Anahita to believe it.

I hung my head down.

“You want me to ask the meaning of affronted. Don’t you?”, I grinned.

“ Sid..!”,  said she in a complaining tone and continued. “Fine.! It means disrespect, insult etc. Okay, tell me one thing. Did you get to speak to her after that?”, she asked.

I silently pushed the word affronted into my vocabulary and replied. “I have switched off my Bangalore number. Haven’t had any word even with my family. But, why are you being concerned Anahita? She would be fine”. I tried to hug her.

She gently pushed me away and avoided the hug. “I should be concerned Sid. I feel responsible. And unlike you, I have emotions and I respect emotions of other individuals”.

The conversation was heading towards a possible rift and I had to steer it in the safest direction possible.

“I understand that I have low volume of emotions, but I am still better than your mom”, I dragged her mom into the conversation.

“You deserved that treatment Sid. Feel good that you weren’t thrown out of the house”, she threw light on the positive side of her mom.

“Hey girl.! Your mom was completely right when she scolded me. I completely deserve that, I agree. But I was referring to that day when your dog had died, when she had left you all alone in the house. You have just recovered from the disease, and it’s not right on her part to leave you unattended”. She wanted to say something, when I interrupted her again.

“For this, my mom in law would lose 400 points. I think it would be difficult for her to impress me”, I tried to lighten the mood again and spoke in humor.

She didn’t laugh. It took me less than five seconds to figure out the reason. Her mom was standing next to the door listening to our conversation. I was pretty sure that she had heard those last 20 seconds of our conversation. I smiled like a stupid and felt like taking a giant leap from the balcony.

“Breakfast is ready. Come downstairs, whenever you are hungry”, the tough principal spoke again and disappeared in no moment.

“So where were we? Yeah. You were telling something about points”, Anahita pulled my leg.

“See this is exactly what I was pointing at. Daughter and her hubby are having a private conversation. Is it right on her part to stand next to the door and eaves drop? She loses 500 points for this”, I acted angry.

“Yeah right..! Convince her to allow me to come with you. Let’s see how many points you are going to lose”, she challenged me.

“Poori was nice aunty!”, I offered fake compliments to her mom, after struggling through the dish that she had prepared.

“Sid. It’s chapathi”, Anahita winked. “You lose 700 points for this”, she whispered.

Chapathi seriously?? – I screamed silently. With one liter of oil dripping from them, those were perhaps the most expensive chapathis that I’d ever eaten.

After the breakfast, aunty asked me if we could have a word about Anahita. I nodded and followed her to the balcony. Anahita stayed downstairs.

It had started raining again. Kolkata is usually considered as a steam cooker, but thanks to frequent downpours, I was enjoying a comfortable stay.

“So you want to take along Anahita with you?” her mom questioned me staring at the tall banyan tree.

“You are aware of her health condition, don’t you?”

“Yeah! But, nothing to worry. There will be regular check ups for next few months. If any residues found, she has to undergo treatments”, I spoke calmly.

There was a silence amidst the sound of the rain.

“I have nothing against you Sid. But, there would come no ‘yes’ from me, for your marriage”.

I am marrying your daughter, and not you, you old lady. I am not dying for your ‘yes’ – I felt like telling her.

“What’s the reason aunty? Cultural difference? My thin volume of hair? You didn’t like my attitude or is it that I am running a startup?” I put forth an objective question with multiple choices.

She went for ‘none of the above’ option.

“Anahita doesn’t want to marry you. Since she was not able to tell you this, She wanted me to act as if it’s me who is against this marriage”

I felt like laughing. “Come on aunty. Anahita loves me a lot, and even you are aware of that. Of course, we had our quota of fights and cold wars, that doesn’t mean that we don’t like each other. If Anahita has a problem with our marriage, she would have said it on my face”, I said.

Immediately, I realized that I had to correct my last sentence – “which she did. But, you very well know that she loves me lot”.

“She loves you Sid. I know that. But, she doesn’t want to marry you”, she replied. It was like an organic chemistry class for me – confusing and hard to understand.

“You have to explain me aunty. You are getting me confused”.

She looked at me. Her eyes were red. I thought she was angry. But when I noticed that fat layer of moisture in her eyes, I knew at once that she was crying.

There was a lady crying in front of me and I had to console her. Instead of doing the gentleman act, I did something stupid but genuine.

“Aunty, I am sorry to say this. But you are in teaching profession, moreover you are a principal. I was expecting you to be good at explaining things, but sadly you aren’t. God bless your students!”, saying this I quickly rushed downstairs.

I had to talk to Anahita.

‘Yes, like the annoying one you just said’, I almost said it.

“You know why guys turn mad, pick up alcohol or give up everything in life and push themselves into a cocoon, after a broken heart?”, I asked.

“Because, it’s hard for them to forget their love and move on?”, she asked.

“What about the rest?”

“Rest 90% set out on a journey, trying to find answers for questions like, why did the girl leave me? Didn’t she love me? Etc. It’s like a puzzle, very hard to solve. They keep asking this question to themselves again and again and again”, I paused.

“And when they fail to find an answer, all that they try to do is forget the question. They want to stop thinking about reasons. That’s why they pick up habits. It’s never about the failed love story Anahita, it’s about those words unsaid and  questions unanswered”, I put forth my theory.

“So you are telling me that, you will become one of them?”, she asked.

“Nope. I am telling you that, you will turn me into one of them”, I alleged her of a prospective crime.

“Sid. You are making it difficult for me”, she was in tears and I had to stop her from crying.

“What’s the matter girl?”, I took her in my arms and gave a warm hug. She buried her face in my chest.

“Doctors have told me that this momentary paralysis is hard to cure, and will recur periodically. Cancer isn’t completely cured. You have your own life Sid, don’t waste it on me”.

“Not motivating enough to dump you dear”, I winked at her while hiding my emotions.

She mildly punched my chest. The girl you love, punching you mildly you on the chest in moments like these – I think it would count amongst the most beautiful feelings that you could ever experience in your lifetime.

“Let’s be practical Sid. You very well know that I can’t even have kids”, she finally had to tell me the truth.

I knew exactly what she was hinting at, but I felt strange that I didn’t find the truth as an earth shattering one. I could only hug her more tightly.

“Why you worry? Even I don’t want kids. And when we feel like having some, we shall adopt”, I said and kissed her forehead.

“It’s not that Sid. Me and you, we can never have a love life. My body is too weak for that”.

However odd it might sound to pronounce, you can’t deny the fact that sexual life is an integral part of your marital life. Her body was too weak for that, and she was concerned that it would either push our marriage into ruins or force me into sacrificing my sexual life.

If I were put in this situation a few years back, I would have backed off from this relationship! But now it appeared like a trifle.

She had spent these three months thinking about all these, and was trying to let go me.

I didn’t speak a word. Instead, gently pinched her nose. She knew my choice – I was going to stay with her.

Her lips stretched, dimples surfaced on her cheeks and she tightened her hug. 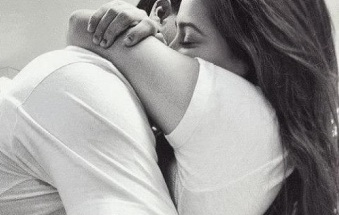